Start a Wiki
Sonic Adventure is a downloadable version of the original game released for PlayStation 3's PlayStation Network and Xbox 360's Xbox Live Arcade on 2010 worldwide. This port was officially announced by Sega on 10 June 2010 that it would be released on the aforementioned platforms. It was then released for Steam on 2011 under the name Sonic Adventure DX: Director's Cut, containing most of the changes found in that game and later received backwards compatibility for the Xbox One on 28 September 2017.

A few millennia ago, the Chaos and Master Emeralds were kept at an altar near the territory of a clan of echidnas (the Knuckles Clan). A peaceful echidna named Tikal, daughter of Chief Pachacamac, befriended the Chao that lived at the altar and their protector, the water god Chaos. When Pachacamac sought to expand his clan's territory, he wanted to steal the Chaos Emeralds and use their power to defeat his rivals. Although Tikal and the Chao stood against him, he ordered his soldiers to charge anyway, resulting in many Chao being injured. This enraged Chaos, who transformed into a terrifying, giant monster and destroyed all of the echidnas, except for Tikal. Tikal sealed herself away in the Master Emerald with Chaos, and the magic caused the area surrounding the shrine to become Angel Island, also known as the continent in the sky.

In the present day, Dr. Eggman learns of the legend surrounding Chaos. Because he believed it to be true, he seeks out the Master Emerald and shatters it, freeing Chaos in the process. Eggman's goal is to control Chaos, and use its destructive powers to collect the Chaos Emeralds and conquer the city and turn it into "Robotnikland"." To help him, he has created the E-100 Series robots. When Sonic the Hedgehog learns of Eggman's plans, he and his friends spring in to action to stop Eggman and they start another journey for the Chaos Emeralds. 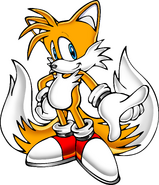 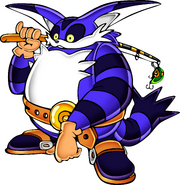 Tikal the Echidna
Add a photo to this gallery 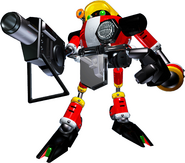 Tikal the Echidna
Add a photo to this gallery

Retrieved from "https://sonic-art-assets-dvd.fandom.com/wiki/Sonic_Adventure?oldid=7105"
Community content is available under CC-BY-SA unless otherwise noted.