Start a Wiki
Sonic the Hedgehog (also known as Sega's Sonic the Hedgehog and Sonic SatAM) is an American animated television series. It was story edited by Len Janson and produced by DiC Animation City. Made with the partnership of Sega of America, Inc., the show is based on the video game series. It aired two seasons on ABC from September 18, 1993, until December 3, 1994. It reran until May 1995. The series depicted Sonic as a member of a resistance movement known as the Freedom Fighters. They battled to free the planet from the evil Dr. Robotnik.

The show's first season is set in a dystopian fantasy world. While family friendly, it explored unusual story concepts for animation. These include losing loved ones to war. At ABC's request, the second season included episodes devoted to humor, while darker episodes were reduced. Princess Sally wore a jacket beginning in the second season. In the first season she wore only a pair of boots. Also beginning in the second season, Bunnie's upper arm is no longer robotic. Further changes include a new color palette for Rotor, and a flashier look power ring creation.

After the series' initial run, it was aired on the USA Network's Action Extreme Team in reruns from June 1997 to January 1998. Reruns aired in syndication from 2004 to 2005.

The series aired in Canada on the CTV Network, with a bonus summer run between June 10 and September 2, 1995, that ABC did not replicate (they instead replaced it with reruns of Free Willy until September 2, 1995). Sonic the Hedgehog has not been rerun in Canada since its cancellation on CTV.

It initially had a complete run on the UK television channel Channel 4 from 1994 to 1996. Season one was broadcast in the Republic of Ireland on RTÉ Two in December 1994.

The show takes place on a planet called Mobius. A warlord and former scientist named Dr. Robotnik (voiced by Jim Cummings), and his assistant/nephew Snively (voiced by Charlie Adler), invaded and conquered Mobotropolis, the capital city of Mobius, with an army of robot soldiers called SWATbots.

The show's backstory explains that Robotnik had once been leader of the Mobotropolis War Ministry, and that his creation and use of SWATbots led the country's victory in "The Great War". In the war's aftermath, he was to be appointed Minister of Science by the King of Mobius, who had decided to close the War Ministry and dismantle the SWATbots following the War. However, Robotnik overthrew the kingdom and declared himself to be the new King. King Acorn was never seen or heard from again.

Robotnik captures most of the citizens, including an intelligent old hedgehog named Sir Charles Hedgehog (Sonic's uncle) and his crowning invention, the Roboticizer. This invention, created with the intention to prolong life, changes living creatures into robots, but had the unintended effect of robbing the individual of their free will. Robotnik uses this technology to enslave the population.

Some citizens managed to escape the coup, and fled to Knothole Village in the Great Forest to hide from Robotnik's army. Under Princess Sally, they formed a group called the Freedom Fighters to restore Mobius and end Robotnik's rule.

Sonic Princess Sally Acorn and The Knothole Freedom Fighters Claming Their Victory over Dr. Robotnik and Snively Gone and His Doomsday Project Being Destroyed But Snively is Alive and he Achieves to take over The Robotnik Empire with the Help of Naugus They Also find Out Dr. Robotnik is Back Too !!! as Sonic Continues his quest to Free Mobius from their hands as they now count with the help on some New Freedom Fighter Members. Sonic and Sally Also get Married go on a Honeymoon and Get their own House Same with Bunnie and Antoine Too and Sonic and Antoine Are Friends Now. 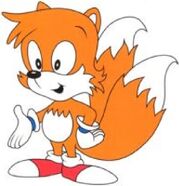 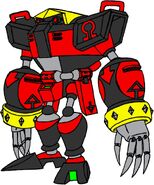 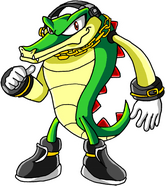 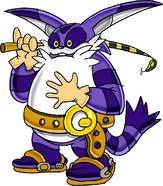 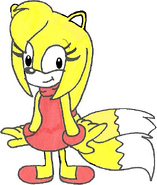 Perci the Bandicoot
Add a photo to this gallery

Sonic the Hedgehog (Satam) - Intro
Add a photo to this gallery

Retrieved from "https://sonic-art-assets-dvd.fandom.com/wiki/Sonic_the_Hedgehog_(SatAM)?oldid=6616"
Community content is available under CC-BY-SA unless otherwise noted.